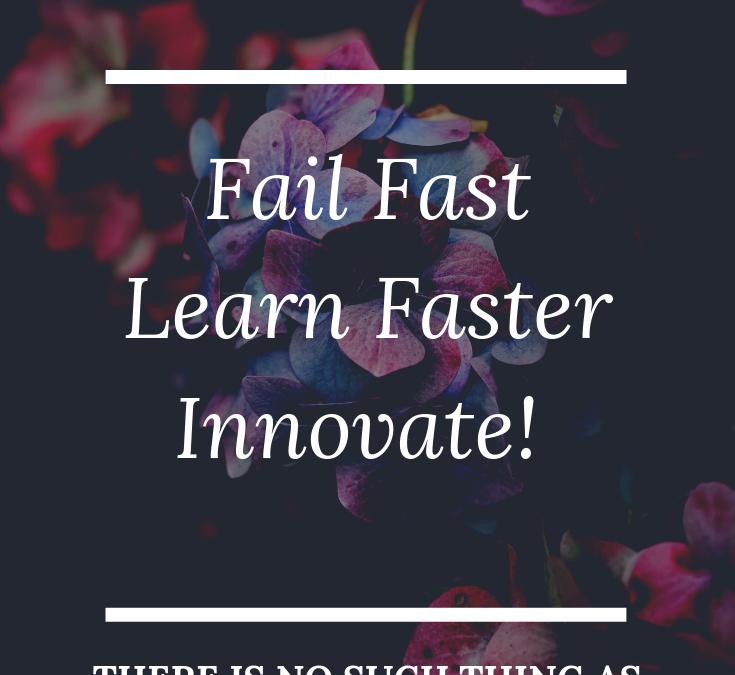 One of the many benefits of Agile is the concept “fail fast, learn faster, Innovate”.

There are two things I particularly like about it. Did you ever have a teacher that said, “there is no such thing as a stupid question”? I did, and I tend to agree, even though I do sometimes get frustrated with questions where the other person just wants me to do everything for them. I am also aware that this likely comes from when I was a kid I would frequently ask my Dad how to spell a word and he would always tell me to go look it up and I would get annoyed because I knew he knew how to spell it and it would be so much faster if he just told me.

This is also known as ‘fail fast, learn faster, innovate’ in the Agile world.

The other thing I love about this concept is that you dramatically shorten the time needed to get the results you want, if not exceed them! Ever done or seen the Marshmallow Challenge? It is a phenomenal exercise I highly encourage you to at least do with your team, if not the whole company. IN summary it is an exercise that allows people to see the value of failing fast and learning from it. Experiencing it, and all the challenges it has, rather than just cognitively agreeing with it in principle with no experience. The experience makes it stick. (This exercise is especially helpful for business trying to use Agile for a team while the business as a whole is still operating as it used to before Agile. In order to be Agile and get the benefits from it, the whole company needs to be Agile, and this exercise really helps them see that!

So, I thought I would share an example of a recent failure that became a smashing success and the Agile way to redeem failures.

I was facilitating a Retrospective for a team and it was a CInco de Mayo themed Retro which included a traditional Cinco de Mayo activity, a scavenger hunt! To make it more effective I used primarily Scrum things and places for my clues so the team would also have to think about what and where they work in a new way. I thought of places that I could make clues for that were related to Scrum, the table we have events, the white board for Retrospective, the toaster over used to make snacks warm, the pig we used to toss around during Daily Scrum, and just to get them moving around the building I added some other Scrum-ish things, like markers, coffee etc. I made the clues, two sets so the team could divide in half and compete, and I put all the clues out, hiding them as best I could.

All is good. Until in the middle of one of the team having a personal revelation they were sharing out loud I realized, I had placed the clues on the thing they were to lead the team to, rather than on something else leading the team to the thing to find the next clue. YIKES! So, for example, I put the clue, ‘you gather around me daily’ on the Scrum board, not on something else leading the teams to figure out what the clue was referring to and going TO the Scrum board to get the next clue 🙁

I could tell my face zoned out as I tried to figure out how to fix it while the team mate was talking. So, I apologized immediately and admitted, while laughing, to the team that I had completely messed up the next activity. We finished what we were doing and then I asked everyone to go stretch for a few minutes and that I was going to fix what I could in a limited amount of time, I gave myself 4.5 minutes. I then raced around and changed about half of the clues, before running out of time. The teams went as far as they could and worked together to figure out what each clue was for, so they got to think of their Scrum work in a new way, got up and moved, and had some healthy competition which was the goal. Granted about half the clues weren’t fixed so they didn’t get to do as much as I hoped but the goal was still met. But the best part is the one team member who rarely likes any of the activities not only showed that he enjoyed the hunt, but he made a point of telling me he did as well! Made my month!:) I try and be very mindful of him and others during planning Retrospectives to keep things more in his zone than not, because I want everyone to feel considered and valued.

So, to redeem the failure;

As usual, please share your experiences with redeeming failures, did your team surprise themselves? How did it go? Did the stakeholders like the ‘fix’?